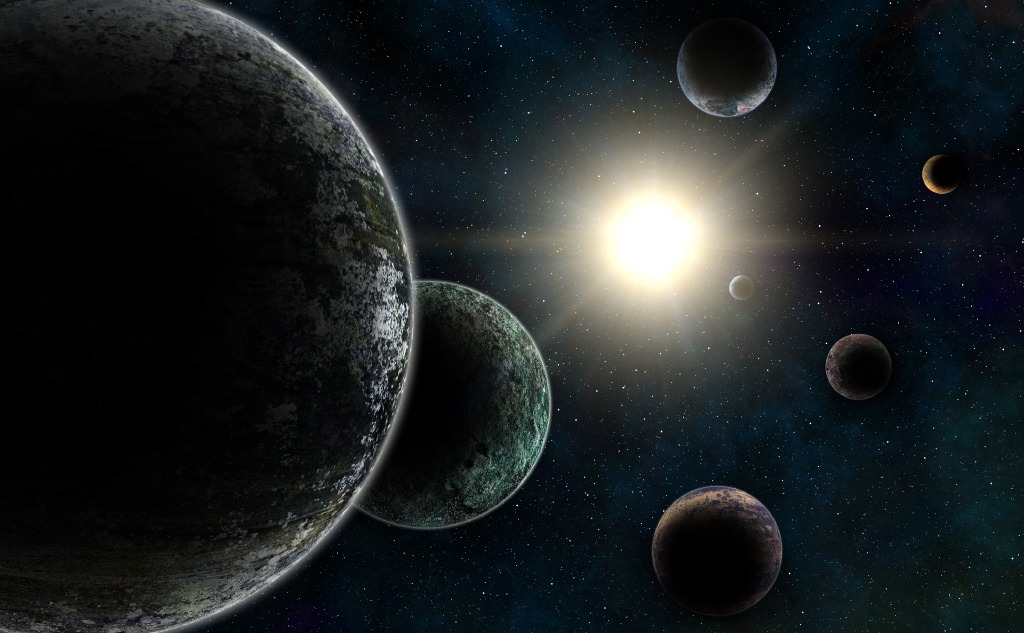 This is about TRAPPIST-1.

Attributes of these planets show the promise of water or even life.

So if you want to learn all about TRAPPIST-1, then you’re in the right place.

But, what about everyone’s major questions?

How far away is TRAPPIST-1?

Could there be water or even life in the new solar system?

The Basics of TRAPPIST-1

Located in the constellation Aquarius lies a rather dim star, known simply as TRAPPIST-1.

The astronomy community ignited with the discovery of seven planets orbiting the star.

Furthermore, the size, distance, and other attributes of these planets show the promise of water or even life.

In fact, at least three falls within the so-called habitable zone.

In other words, the appropriate distance from a star for water, and hopefully life to exist.

Also, based on distance from their star, planets are named:

When searching for planets beyond our solar system, astronomers use one particular method.

Simply put, as planets orbit between their star and Earth, the star’s light briefly dims.

And, we use such light dips to observe the size, composition, and more.

In fact, discoverer Michaël Gillon and colleagues utilized the trusty method. You can read the observations, originally published in the journal Nature.

Finally, TRAPPIST-1 weighs in at only 8% of our Sun’s mass. So, not to mention, much cooler, dimmer, and redder, it produces dramatically less radiation.

Is Their Liquid Water on TRAPPIST-1?

In fact, we want to know if liquid water exists at all beyond planet Earth.

After all, after centuries of searching, we currently hold zero evidence.

Indeed, TRAPPIST-1 hosts multiple planets in its habitable zone. And, within this zone, life’s primary ingredient can possibly exist.

After all, Venus technically falls within our Sun’s habitable zone. In case you need a reminder, Astronimate imagines living on Venus in this article.

So, could water exist on TRAPPIST-1? In short, we won’t know until further observation.

First of all, we must learn more about the planet’s conditions, surface temperatures, and more.

However, such learning falls well within our reach.

The Distance to TRAPPIST-1

At last, here is where my realist personality arrives.

Much like possibilities of life, humans want to know, “how far away is TRAPPIST-1?”

After all, news and media outlets always include distance with exciting new finds.

Unfortunately, they are also ill-equipped to explain what such distances mean.

Furthermore, they can’t accurately explain cosmic distances in relation to mankind and our current abilities. Therefore, I will!

In fact, 40 light-years would be a mere millimeter to our universe.

However, let’s break this down in human terms. One light-year is how far light, unobstructed, can travel in one Earth year. Furthermore, one light-year equals around 5.8 trillion miles.

In other words, in-person visitation is nowhere in our near future. But, hands-on observation does not currently fit our TRAPPIST-1 to-do list.

So, I simply like to mathematically point out what news agencies do not.

The Conditions of TRAPPIST-1

Finally, we want to know what life would be like in the TRAPPIST-1 solar system.

Surprisingly, all planets circling TRAPPIST-1 have orbits closer than Mercury to our own star.

However, TRAPPIST-1 is not all that much larger than the solar system king, Jupiter.

Furthermore, most light from the star is in the form of infrared wavelengths, invisible to human eyes.

In fact, it’s believed that TRAPPIST-1 may burn for another 5 trillion years. In other words, a thousand times longer than our Sun.

Initially, habitable-zone planets of TRAPPIST-1 seem too close, in danger of radiation blasts.

After all, inner-most TRAPPIST-1b orbits the star in 1.5 Earth days. In other words, a year on TRAPPIST-1b is 36 hours.

Plus, inner planets lie only fractions of the Earth-Sun distance from their star. So actually, like our Moon, inner planets may also be totally locked with TRAPPIST-1, meaning the same side always faces the star.

However, depending on atmospheres and magnetic fields, planets this close may be able to withstand the star’s power. Not to mention, the longer lifespan of such stars and solar systems allows a much greater time for life to evolve on some planets.

Could there be life on TRAPPIST-1?

Next, we want to know, “could the TRAPPIST-1 solar system have life?”

Unfortunately, planets TRAPPIST-1b through d are likely too warm to harbor liquid water.

As a result, human life is currently unlikely, as water is life’s key ingredient.

After all, while TRAPPIST-1 is far cooler, inner-most planets orbit at sub-Mercury distances, still much too hot.

Next, TRAPPIST-1e falls in a zone in which liquid water and life could exist.

Most importantly, the planet would require the right atmosphere to help balance the star’s heat.

Especially since the planet still only orbits the star at 10 times the Moon-Earth distance. In other words, still super close! Not to mention, 1e is around 90% of Earth’s size and over half our mass.

Then, we consider TRAPPIST-1f, still within the habitable zone. Weighing in at 60% Earth’s mass and 104% our size, planet 1f may host liquid water.

Also, 1f likely receives the same starlight as Mars receives from our Sun. So, essentially, with the right atmosphere, such a planet may be a true candidate to host life. However, much more investigation is needed to know for sure.

Overall, as noted above, atmosphere and other information will be key in truly knowing whether or not life may exist in TRAPPIST-1. However, the system holds several wonderful contenders.