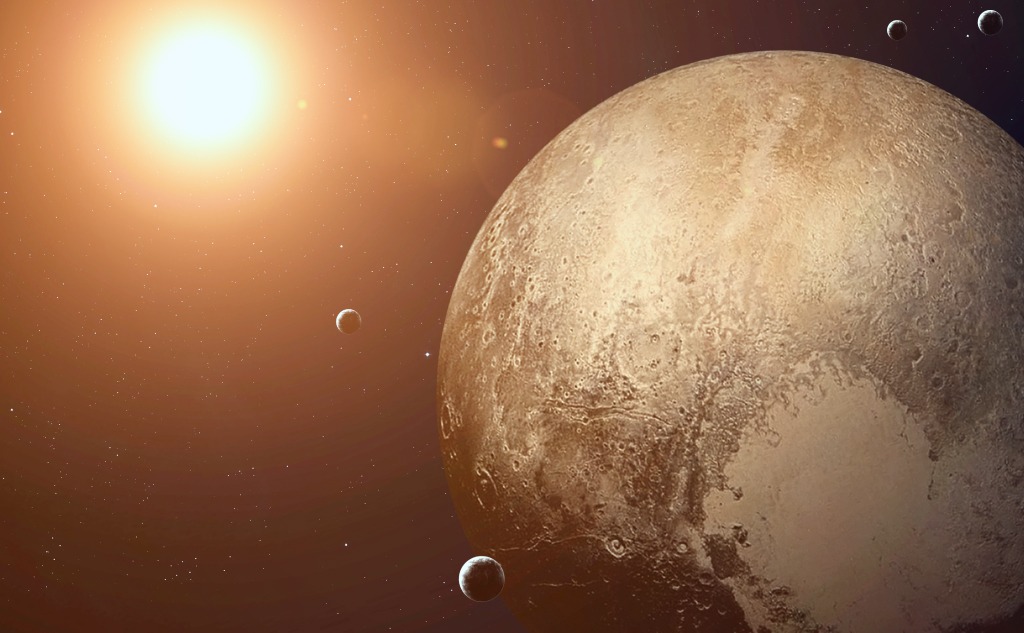 This is about what would happen if Pluto became a moon of Earth.

Pluto would provide quite a nice place to colonize.

So if you want to know what would happen if Plus become Earth’s second moon and all the details about it, then this article is for you.

The dwarf planet Pluto is located in the far reaches of the solar system.

On average, it is 40 times more distant from the Sun than the Earth. Its surface area is slightly bigger than Russia’s. You can fit 150 Pluto’s inside Earth.

So what if this small dwarf planet were to become a moon of the Earth?

That would mean that Pluto would need to get closer to the Sun, which would provide quite a few drastic changes to its surface.

Pluto would need to travel a massive 4.5 billion miles. Even light takes five hours to reach Pluto from the Earth.

But as Pluto approaches Earth, it gets closer to the Sun. The temperature of Pluto would rise. The frozen nitrogen melts and makes a nitrogen ocean that covers the entire surface of Pluto.

The only solid thing on Pluto’s surface would be watered bedrock mountains, which would be sticking out of the nitrogen ocean. It would be quite a magnificent sight.

The Pluto’s would not last for very long because while Pluto approaches the Earth, it’s getting closer to the Sun.

Nitrogen will reach the boiling point, making all of the nitrogen notions slowly evaporate. Creating a very blue and somewhat thick atmosphere.

The atmosphere will last only for a few thousand years because of the low gravity.

Pluto’s surface area is going to be mostly water ice. It gets frozen at 32° F. Because it will be minus, it will be a frozen water ocean. It will be like that for a long time until it reaches Earth’s orbit, where the temperature is usually 50.3° F.

Depending on Pluto’s atmosphere there, the water, ice layer of Pluto will start to unfreeze. Creating a water ocean covering Pluto’s surface.

Oceans will likely stay liquid throughout day and night because of the atmosphere. So heat would be transformed.

Pluto’s Effects on Earth as a Second Moon

Pluto is quite a small object, even smaller than the Moon, and it is smaller by a lot.

The Moon’s surface area is double the area of Pluto, and the surface gravity of the Moon is more than two times stronger than Pluto’s.

The Earth tides and waves would be a bit bigger, and the day’s length could change by a few minutes.

But in general, everything and everyone on Earth would likely be fine.

So Pluto would appear as a small blue ball in the sky. It would be smaller than the Moon, but it will look quite magnificent with flowing oceans that would be pretty deep, maybe even more so than the Earth’s ocean.

In fact, with Pluto being a moon, it would have more upsides and downsides.

Pluto would provide quite a nice place to colonize. It would have water and a good enough temperature with a blue and somewhat to take atmosphere.

But the atmosphere will go away after a few thousand years. It will return to the old thin atmosphere, meaning temperature will again begin to be unstable, likely from 122° F during the day and minus 122° F at night.

Meaning oceans will freeze during the night and be liquid during the day.

Still, humans by that time will likely figure out a way to keep an atmosphere.

So, of course, Pluto will not begin to drift towards the Earth. It’s just a fun idea to see what would happen.

And it looks like it is quite a good tot that would provide humans another place to live on, which would extend humanity.