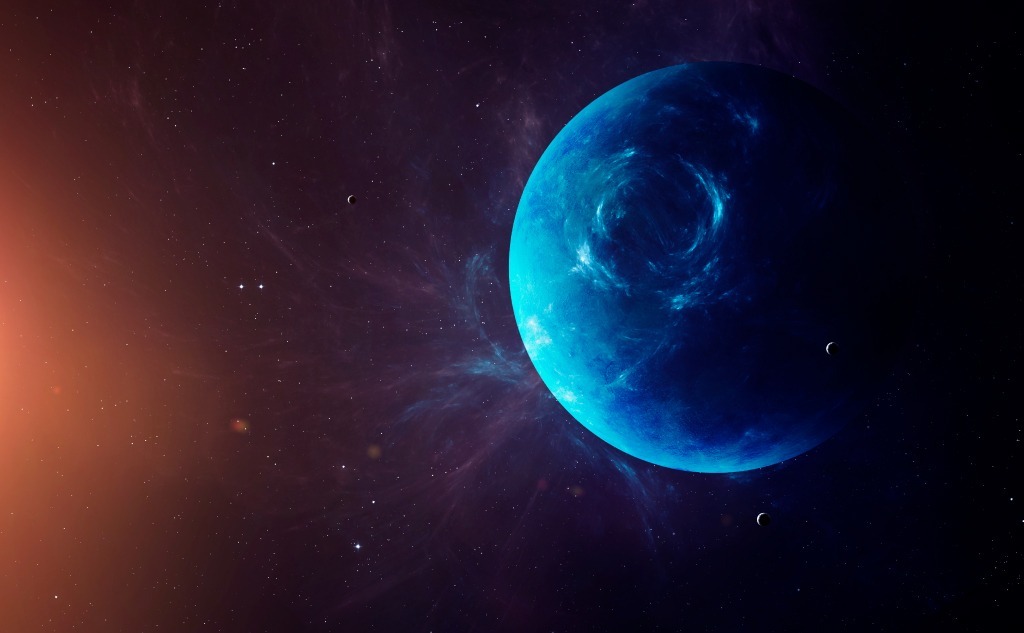 This is about how it would be to live on the planet Neptune.

How about bone-breaking winds?

So if you want to know how life on Neptune might be, this article is for you.

What Would It Be Like To Live on Neptune?

First predicted in 1781 by using only math, Neptune is a distant ice giant.

Earning its name from the Roman god of the sea for its deep blue color, Neptune lies 2.7 billion miles away.

Plus, upon Pluto’s planetary demotion in 2006, Neptune is our solar system’s most distant planet. But, what would it be like living on Neptune?

Similar to most planets, Neptune is a volatile world with no solid surfaces.

Besides, the desolate planet is no place for human life.

However, let’s use our imagination and pretend that we have the tools needed to inhabit Neptune.

Now, similar to living on other planets in the outer solar system, your new planet has no solid surface. Therefore, living on Neptune will require constructing a bubble-like dome in the upper atmosphere.

But, the dome will require tremendous strength to shelter you from deadly winds.

But, the northern parts are slightly more favorable. Our only close encounter with Neptune happened with Voyager 2 in 1989.

Despite the few missions, data indicates the southern region is home to the most extreme weather.

Frigid temperatures and sparse Sun energy mean most substances, including water, are frozen.

Now, it is believed that liquid water may exist far below Neptune’s surface. However, the likely deadly pressures are well worth avoiding.

Your Typical Day on Neptune

Now, during your newly-shortened day, you venture out to explore.

At 97,000 miles around, Neptune is not easily explored in a single day. Not to mention, your planet is mostly wild winds and deadly storms.

Not necessarily a sight-seeing dream world. Yet, living on Neptune does have one infamous landmark.

Technically, your new home’s day is only 16 hours and 6 minutes. Not so bad, right?

However, not having solid surfaces means different parts of your planet rotate at varying speeds.

In other words, the “nine-to-two” grind is now your daily routine.

Journeying into the southern parts, you encounter the Great Dark Spot.

First discovered by Voyager 2, the Dark Spot is a gigantic storm, big enough to fit your previous home planet, Earth.

But, with recorded wind speeds of 1,500 miles per hour, you keep a safe distance.

Approaching dinner time, you decide to return home. Although, with nearly zero sunlight, your days and nights are both permanently pitch black.

Your Typical Night on Neptune

Made of dark, dusty materials, your rings remained unseen until the 1980s. Paling in comparison to Saturn’s beautiful ring system, you are still in utter awe.

Plus, astronomers believe your rings will be rather temporary. So, your move has happened at a special time.

Now, after enjoying the rings, your telescope turns to your 14 known moons, including Triton, your largest moon.

Triton spins in the opposite direction of its planet and is the only large moon to do so.

Ultimately, captured by Neptune, Triton once wandered aimlessly through the solar system.

Deemed one of the coldest places in the solar system, Triton’s surface is -391º Fahrenheit.

Also, one of the few currently geologically active moons, Triton has volcanos.

Yet, observing the volcanos from a safe distance, you instantly notice that they are unusual.

Shimmering geysers of nitrogen and ammonia gas burst five miles into the sky.

Finally, you enjoy a spectacular view of neighboring planets. As opposed to Earth, the previously hard-to-see planets are now your night sky staples.

Even the tiny former planet, Pluto, is in play. Now, only a few hundred million miles away, Pluto is similar to Earth to Jupiter.

Your Typical Year on Neptune

Living on Neptune, your new calendar year will be a massive change.

One single year on your new planet is more than 60,000 Earth-days-long.

Actually, in 2011 your planet completed only its first orbit since its discovery in 1846.

Basically, if you left Earth upon retiring at 65-years-old, you are now less than one year old (queue Frank Sinatra’s “You Make Me Feel So Young”).

In fact, your first birthday party will not occur for another 24,000 days.

So, keep in mind that your Dora the Explorer-themed party may seem rather foolish and outdated by then.

However, you now move quite sluggishly, even for a toddler.

Bodyweight, running speeds, and weight lifting abilities are now working against you.

But, hey, you now have 165 Earth-years to work on meeting your New Year’s resolution.

Does Northface or Patagonia have any sales?

You should check, simply because your new planet is an absolute Popsicle.

Being billions of miles away from the sun means little-to-no light or heat.

Plus, any “heat” you do enjoy comes from processes in your new world’s interior. And, that ain’t much.

Yet, believe it or not, the cold is not your worst enemy. Clocking the fastest winds in the solar system, Neptune is our cosmic Chicago.

Wind speeds on Neptune can reach a frantic 1,500 miles per hour. In other words, even your “breezes” can surpass the speed of sound.

Made of ever-changing and horrific storm systems, your planet is one gigantic hurricane. Traveling from region to region, winds, temperature, pressure, and precipitation can all change within the blink of an eye.

Ultimately, living on Neptune will require constant attention to forecasts. Yet, they will read “deadly” 99.9% of the time.

Finally, like most outer planets, you may notice diamond raindrops.

Complex weather and chemical composition in your atmosphere are to blame.

Ultimately, your frigid temperatures and high pressures squeeze the materials into chunks of diamond.

Basically, add an expensive helmet to your travel checklist.

Have you often wished, “if only the holiday seasons were 300 degrees colder?”

Would successfully flying a kite made of pure steel make you happy?

Do you just want to be a balding, overweight, and sloth-like baby that has to wear 15 layers and iron boots to leave the house?

Well, living on Neptune is life for you.

However, with blood-freezing temperatures, and bone-breaking winds, leaving the house is unlikely.

Even NASA has only sent one mission close to Neptune.

Before you load up your parka and journey 2.7 billion miles, you may want to sleep on it.

See What Life Would Be Like on Another Plant