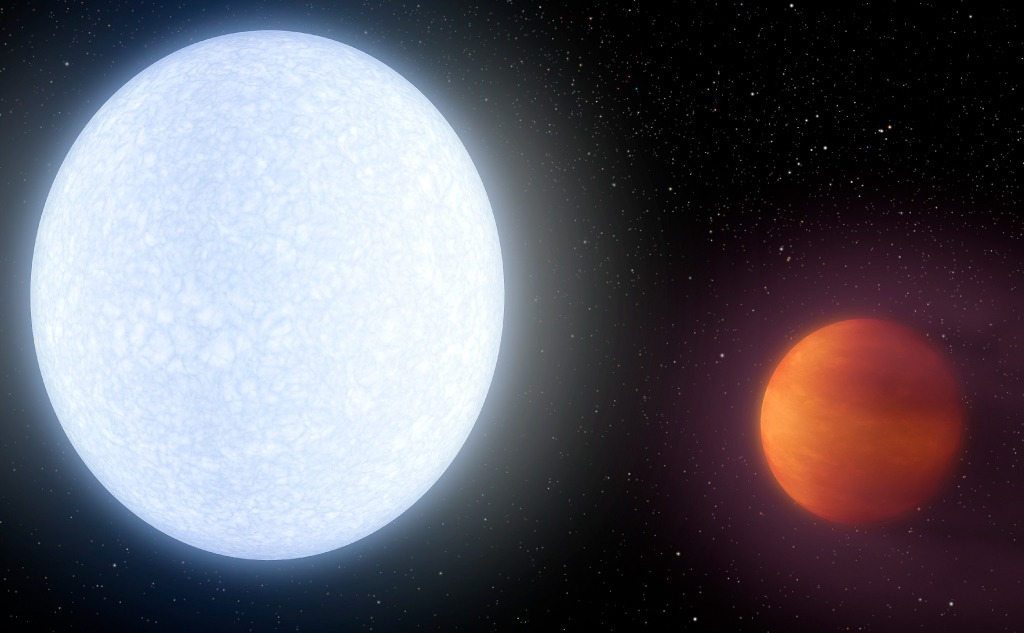 This is about the hottest planet in our universe: KELT-9b.

The hottest planet in our solar system is Venus.

So if you want to know more about the hottest planet in our universe is, you’re in the right place.

Hottest Planet in Our Universe

Since confirming our first official exoplanet discovery in the early 1990s, we have spotted all shapes, sizes, speeds, and more.

However, a new champion for the hottest known planet was crowned in 2017, KELT-9b.

In our exoplanet search, it’s not uncommon to find Hot Jupiters, gas giant of Jupiter’s size and mass with a close, almost Mercury-like orbit around its star.

Yet, the discovered KELT-9b has officially blown the competition away, experiencing daytime temperatures of 7,800º Fahrenheit.

In other words, KELT-9b is hotter than most stars. No, that’s not a typo.

Announced at the 230th meeting of the American Astronomical Society by B. Scott Gaudi (Ohio State) and Karen Collins (Vanderbilt University), KELT-9b was discovered during the KELT survey (Kilodegree Extremely Little Telescope).

KELT surveys the sky for abnormally bright and large stars, typically left unexplored by other exoplanet missions, like NASA’s Kepler.

At three times Jupiter’s mass and twice its size, even KELT’s small telescopes could spot KELT-9b orbiting its parent star.

All in the Parent Star

KELT-9b owes its record-setting temperatures mostly to its Sun, KELT-9.

The large A-type blue giant star is around 2.5 times our Sun’s mass.

The scorching radiation is causing the planet to simply evaporate as it orbits the star.

In fact, it may be losing 100 billion to 100 trillion grams of atmosphere per second, according to Gaudi. The evaporating material likely gives KELT-9b a comet-style tail.

Plus, the KELT-9 parent star rotates so rapidly that it takes on an egg-like shape (depicted in article feature image).

Actually, this same effect can be seen in our own solar system’s Saturn.

A planet slowly evaporating is strange enough. However, it is only one of many other odd things about KELT-9b.

KELT-9b is tidally locked with its Sun, meaning the same side constantly faces the star.

Our Moon is tidally locked with Earth, causing its so-called permanently “dark side.”

As a result, this side experiences the sweltering 7,800º temperatures.

Not to mention, molecules and potential for life are simply unable to be produced on this side.

Alternatively, the “dark side” of KELT-9b lies in eternal darkness. But, with the planet’s minuscule atmosphere, heat is likely not easily transferred from the daytime side.

As a result, the planet’s dark side is drastically “cooler.” However, under such radiation, the planet’s sheer surface temperature ensures truly hot conditions, regardless of side.

Existing so close to its Sun, like Mercury, KELT-9b orbits rapidly in only 1.5 days! Not all that uncommon, right? But, unlike most planets, KELT orbits perpendicular to its star’s axis of rotation.

In other words, the planet orbits over and under the star’s north and south poles. That is rather uncommon.

Unlivable, but Worth It

Indeed, this planet is completely unsuitable for human life as we know it. But, studying the mysterious planet is well worth our efforts.

According to Gaudi, Earth-like planets orbiting Sun-like stars are both desirable and relatively easy targets.

Yet, worlds like this help us learn how planetary systems form around hotter, brighter, more massive stars.

While living on KELT-9b may be out of the question, it may provide one more puzzle piece for understanding our fascinating universe.