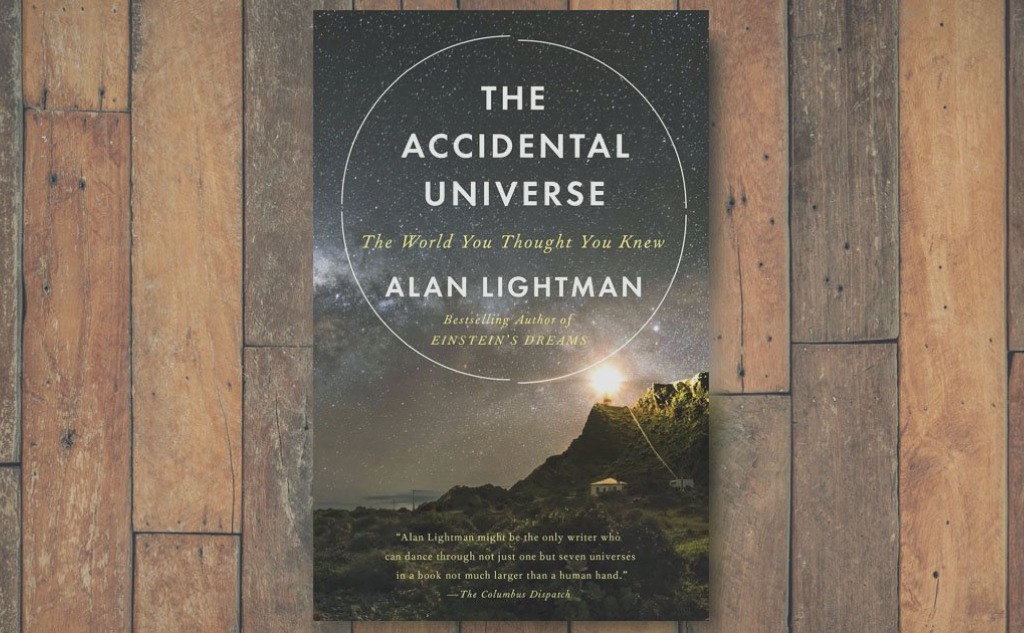 This is a review of the book The Accidental Universe: The World You Thought You Knew by Alan Lightman.

The book’s poetic/philosophical voice will give you a unique outlook on the universe.

If you want to get a review of this book, then you’ve come to the right place.

“The Accidental Universe: The World You Thought You Knew” by Alan Lightman

The Accidental Universe: The World You Thought You Knew is similar to many astrophysics and cosmology books, exploring the universe’s evolution.

Yet, Lightman peers into the universe from such unique and fascinating vantage points.

From spirituality to symmetry to size, you explore the unfathomable, massive, and even shocking aspects of our known universe and beyond.

Plus, in typical Lightman fashion, each section is caked in anthropological and philosophical flavors.

Compared to typical attributes, Accidental Universe takes you on a mental journey through our cosmos in a refreshing way, asking some of life’s most sought-after questions.

Alan Lightman’s passion for both art and science (see bio below) never seize to paint his work unique.

After all, given the entire universe as a topic, abstract discussions and open-ended points are no simple task. Yet, Lightman sticks the landing. This is his wheelhouse.

Taking concepts like universal symmetry and weaving in human kind’s desire for it is a brilliant and refreshing approach.

Not to mention, Lightman often uses wonderful contrast, such as our devious desire for asymmetry.

As a whole, religion is a sensitive social topic. Furthermore, religion versus science is a wildly debated and highly charged match-up.

Frankly, viewpoints aside, I found this topic to be unnecessary, especially as its own devoted section.

However, I refuse to entirely hold Lightman accountable for two reasons.

Firstly, more or less, this book is a composite, assembled from individual essays.

Actually, as a standalone book, essay, or other literary work, this topic is prime.

Personally, it struck me as an awkward outlier among the book’s other subjects.

Second, Lightman, of course, offers generous banter towards both sides of this debate.

As a result, this section overall remains rather fair.

Yet, he also blatantly exclaims his particular views, thus, ultimately cheapening his generosities toward the opposing side.

Yet, I am technically committing the same crimes in this very paragraph.

In literature, brevity is not easily achieved. Certainly, scientific writing is far from an exception.

In fact, attempting to explain subjects that no human totally understands often winds up requiring hundreds of pages.

Now, given the right subject, author, book, and more, I never mind a sizeable read.

But, I admire the brevity of Alan Lightman. Similar to his refreshing topical selections, the man carries such potent confidence in his work.

Sticking iron-clad to his points, leaving out the extraneous, Lightman drives this book from start to finish.

Again, for such a vast topic, his laser-focused approach is quite refreshing and admirable. Perhaps this is yet another benefit of a book compiled from individual essays.

Any avid science enthusiast will benefit from reading The Accidental Universe.

A pioneer in the field, Alan Lightman provides a one-of-a-kind reading experience full of odd but exceptional mashups like cosmology, philosophy, and psychology.

Plus, his wonderful precision makes this a rather quick, enjoyable read. Bookshelf-worthy, no doubt.

Tennessee-born physicist and author Alan Lightman held a deep fascination for both science and art from a young age. Those familiar with Lightman’s work can agree that his philosophical, quasi-poetic approach to explaining sciences demonstrates this flawlessly.

Scientifically, Lightman earned his stripes through contributions for astrophysical extremes.